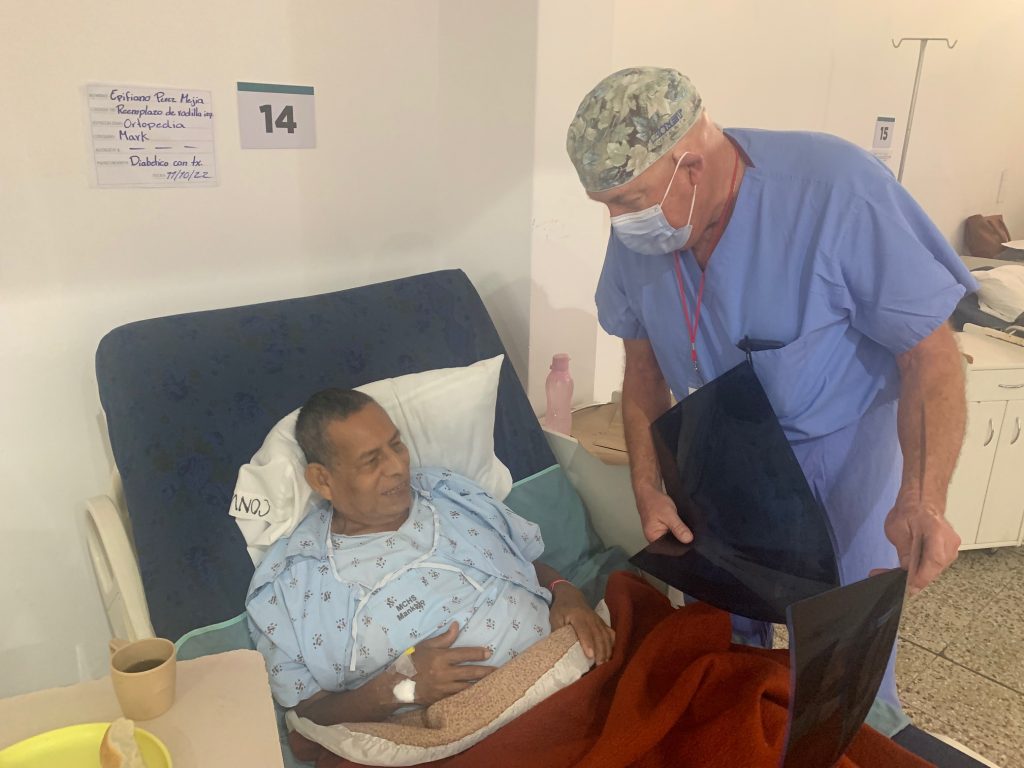 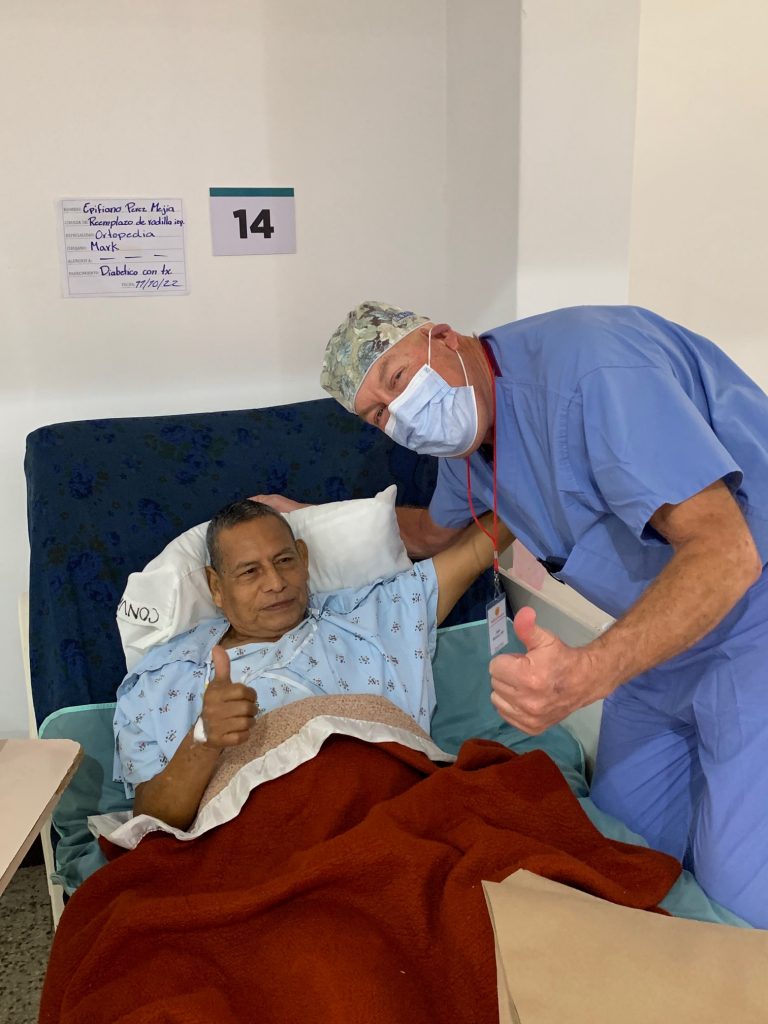 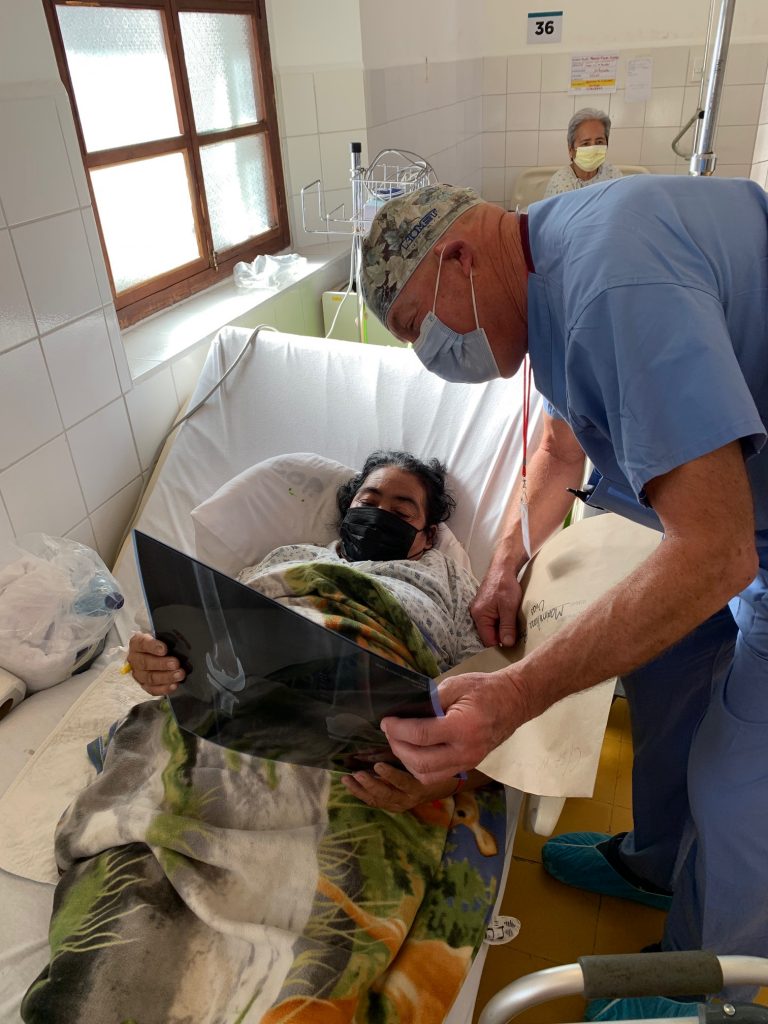 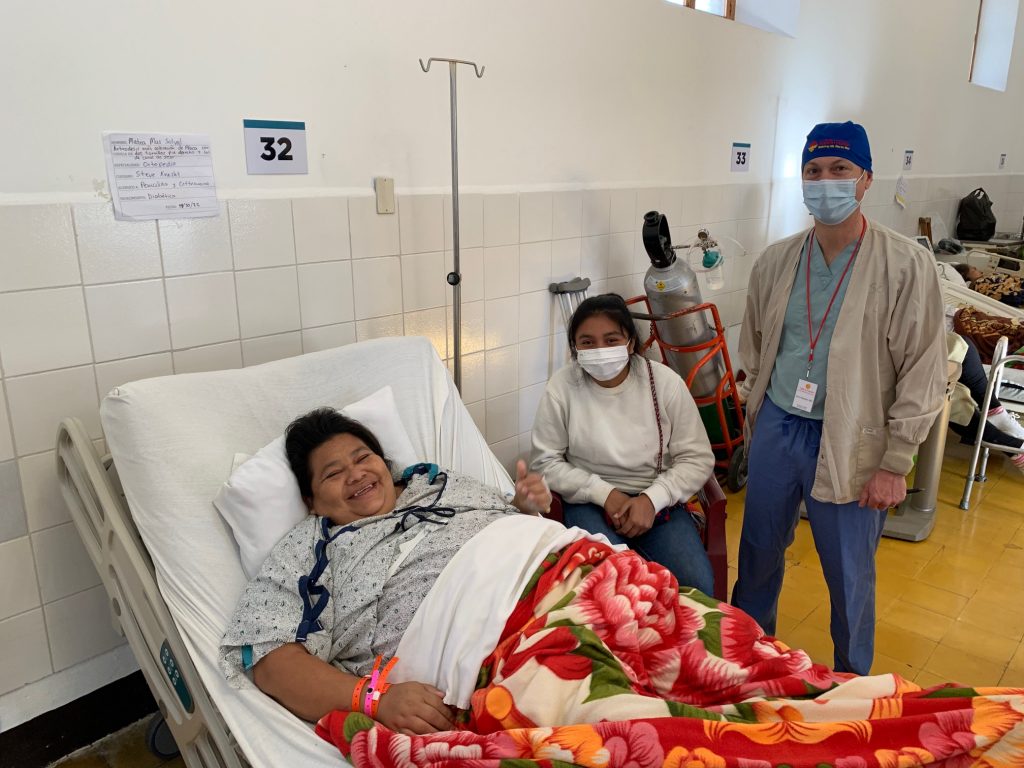 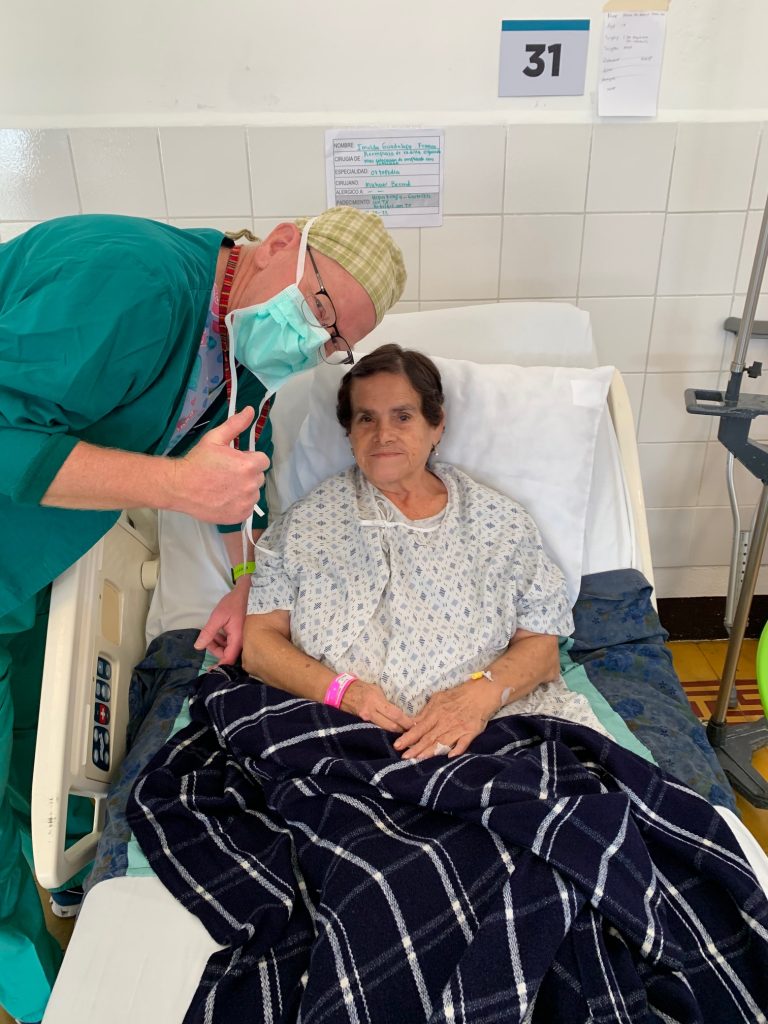 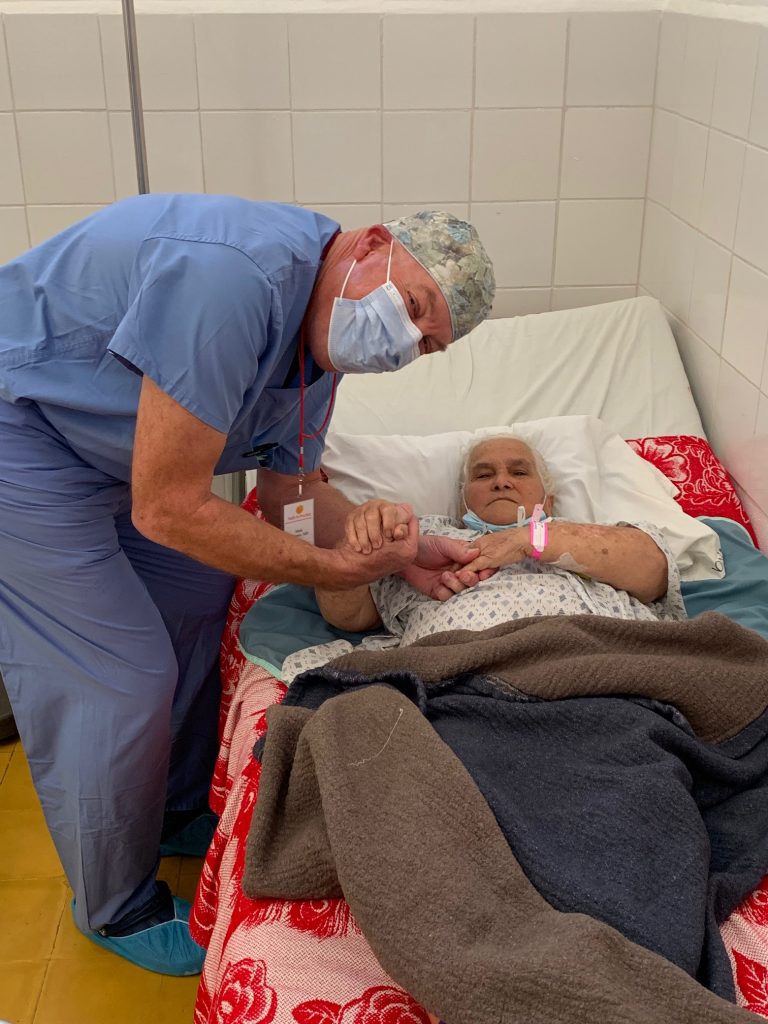 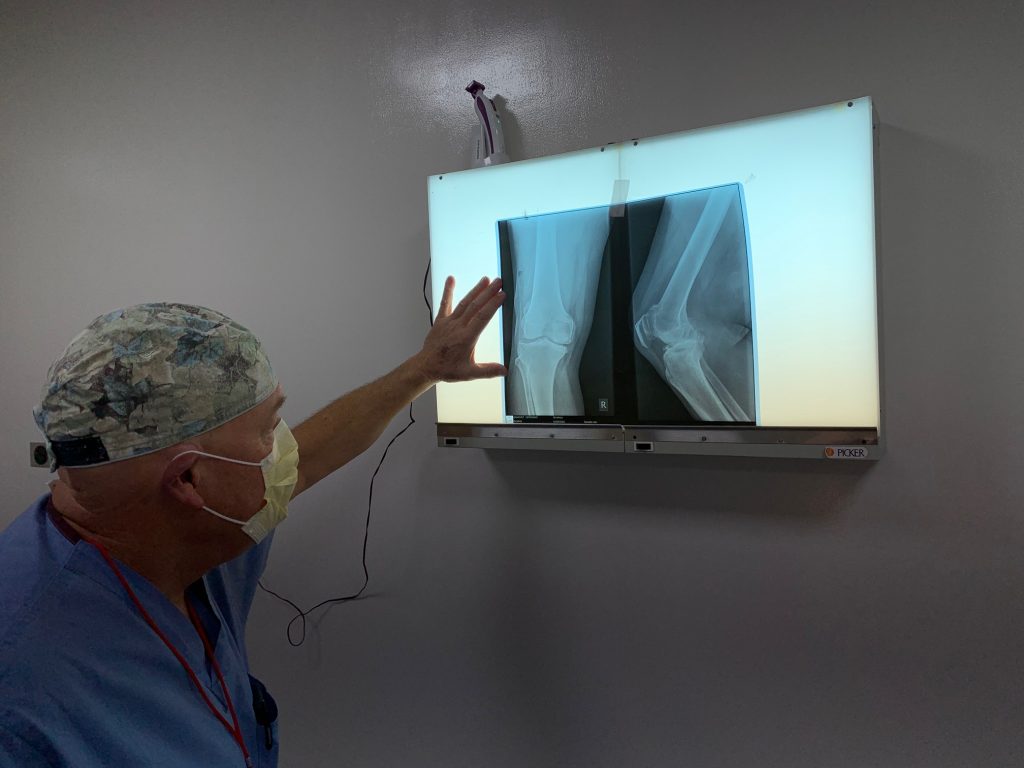 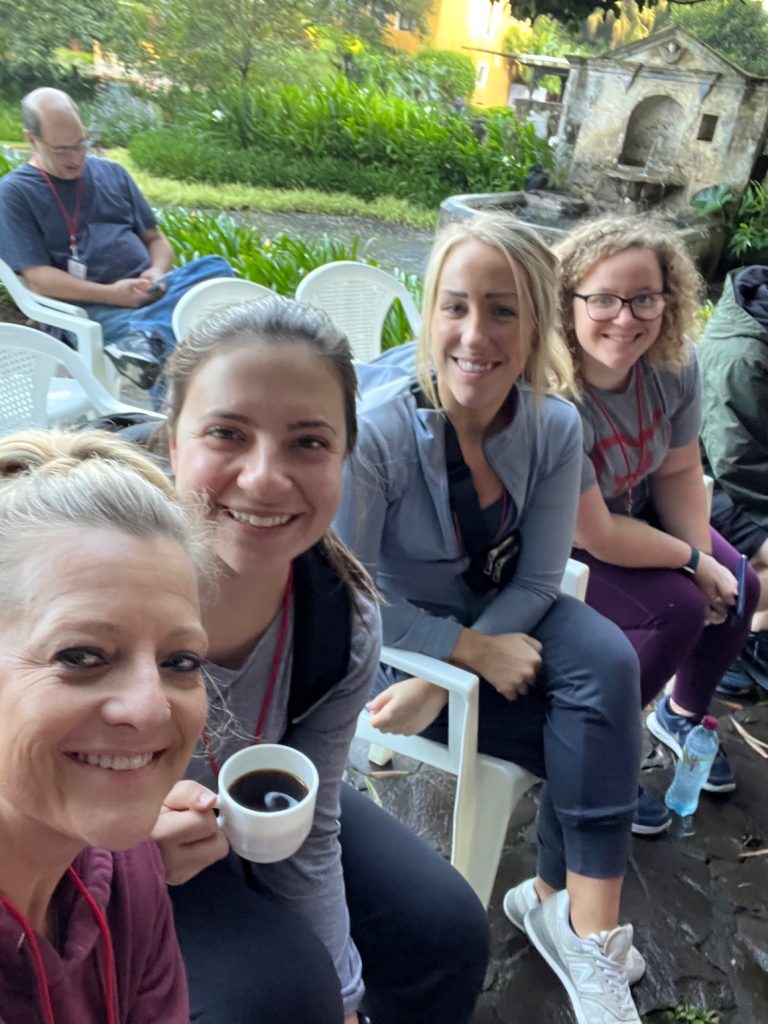 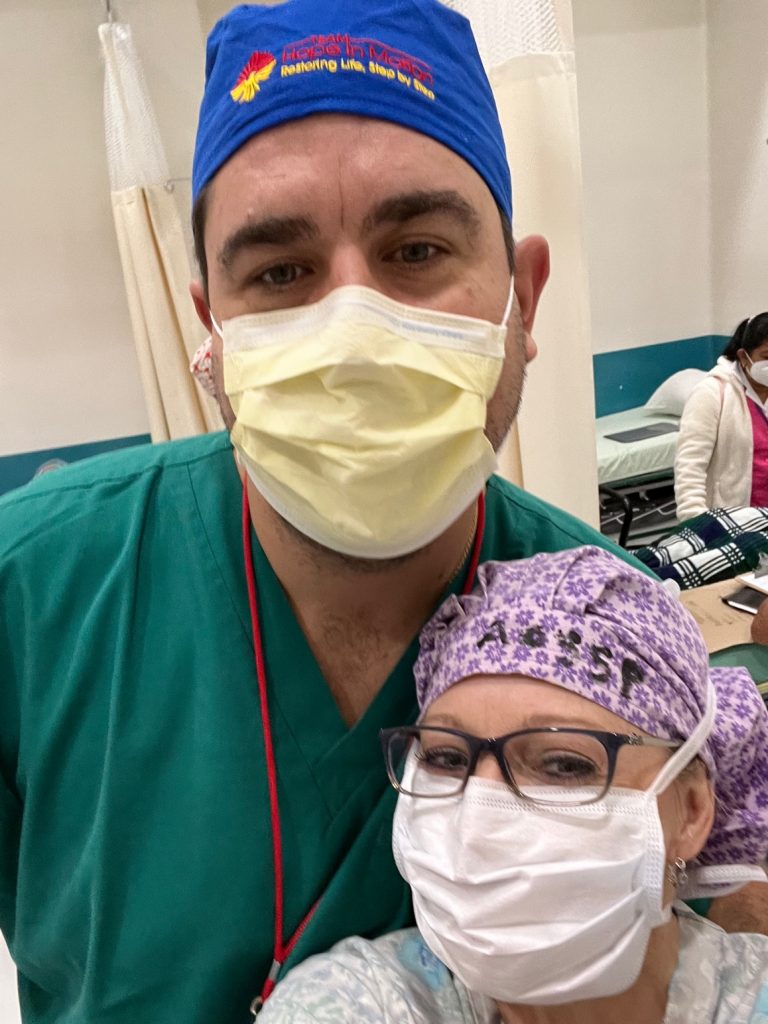 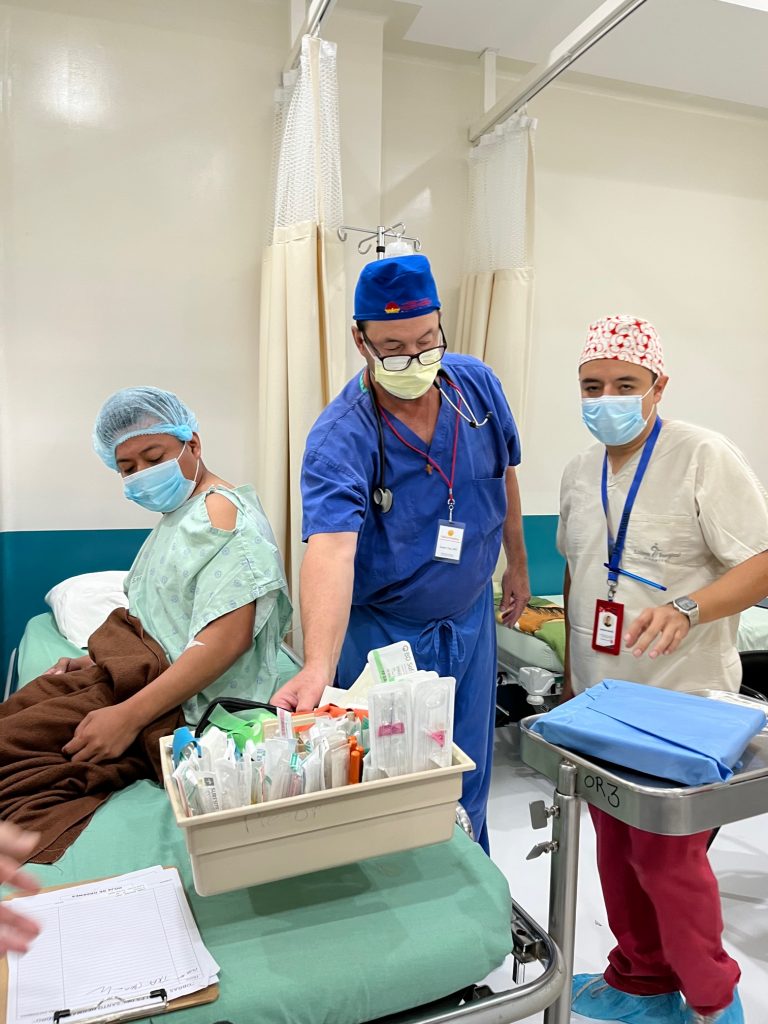 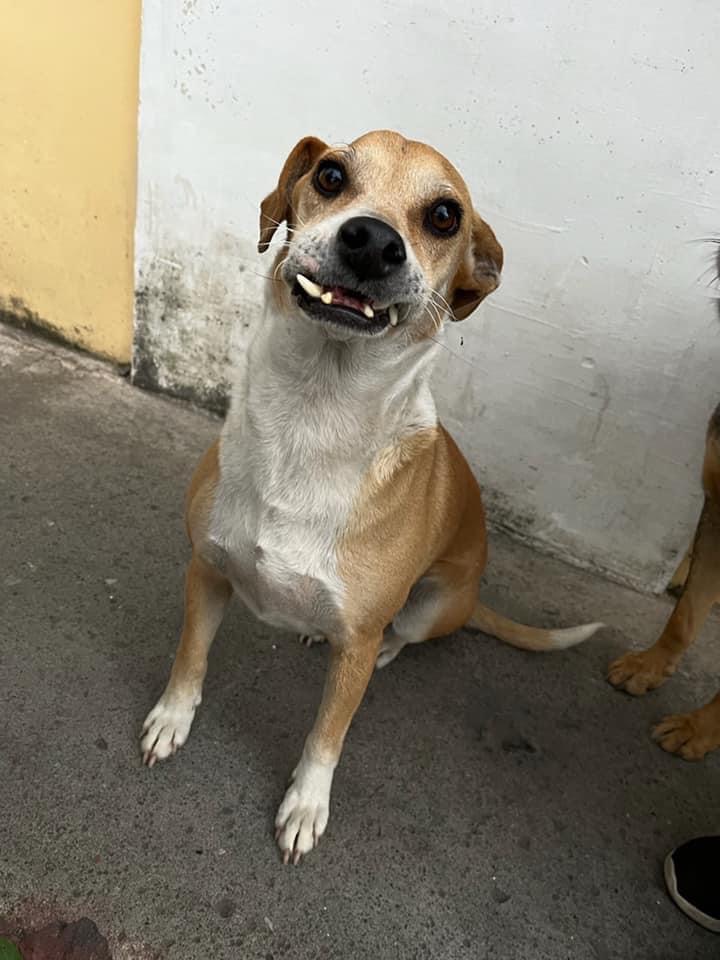 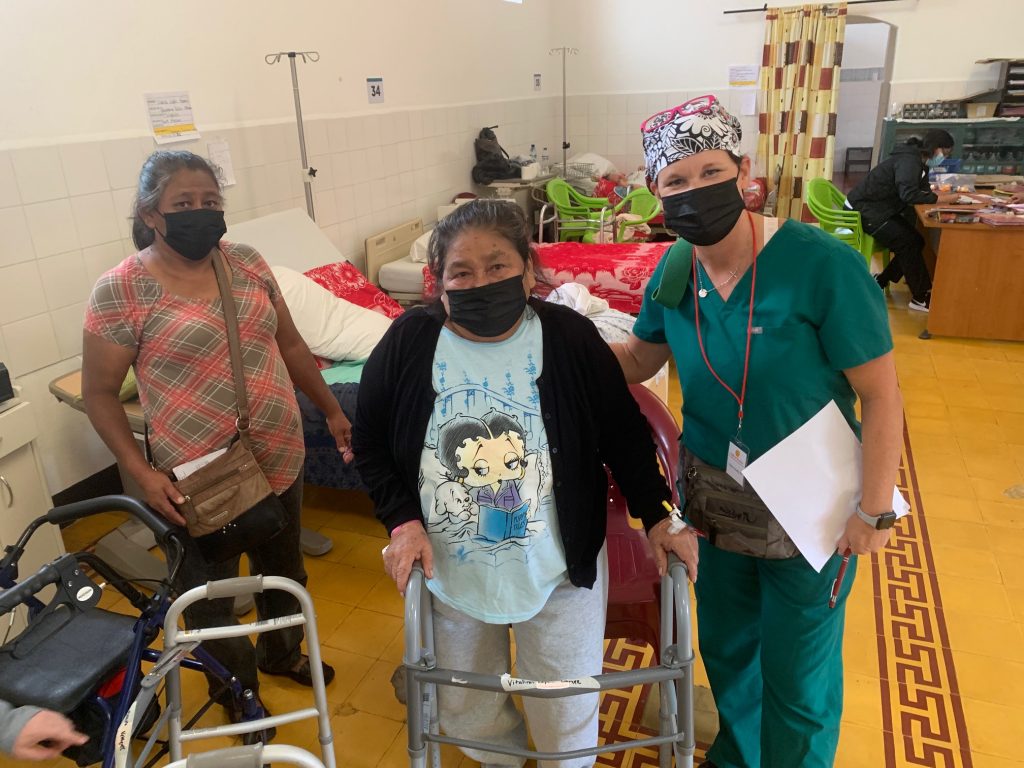 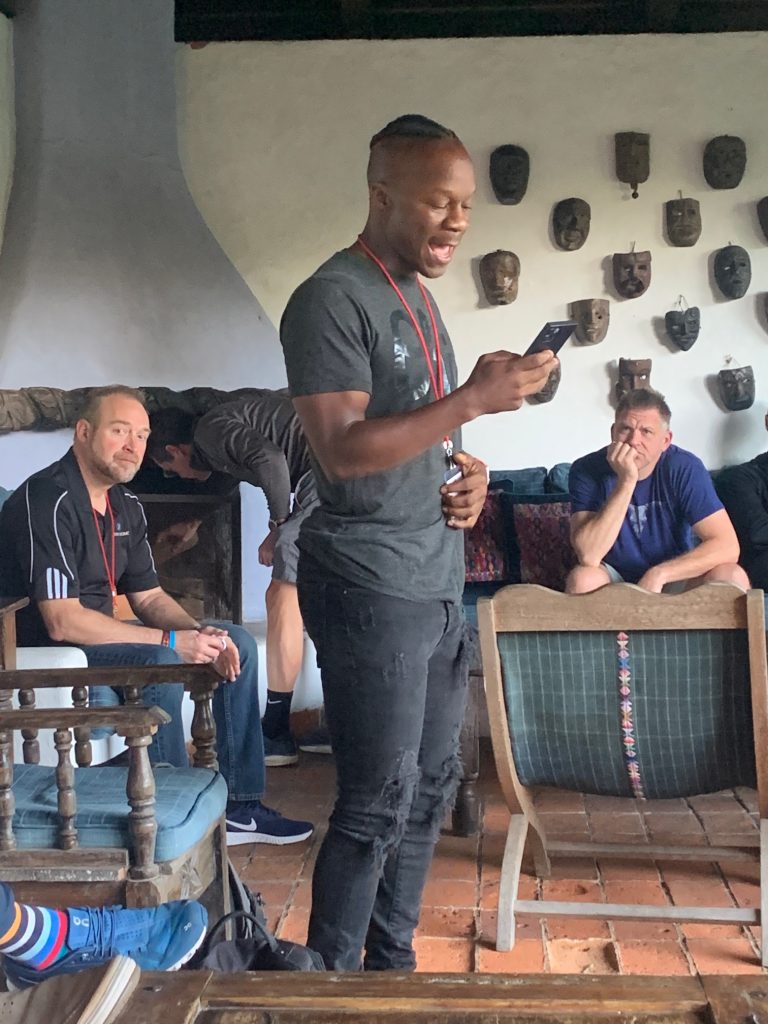 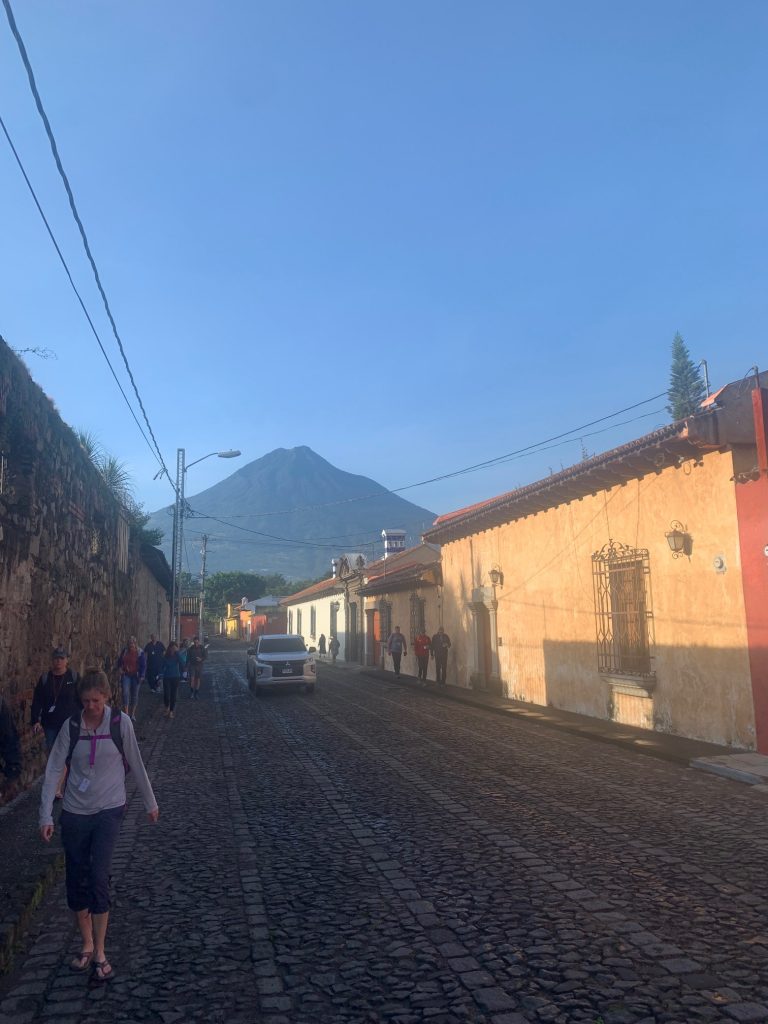 Surgical day 3 is best described as “getting in the groove”.  As the team gets to know each other better, knows their jobs and how to function inside the hospital, efficiency is improving and it is extremely gratifying to see patients standing up and test driving their bodies with their joints repaired and their deformities corrected.

After the energetic souls did their yoga and breakfast was served, Gavin again delivered a thoughtful and gracious message first thing in the morning.  Today started with clear skies with bright sunshine shining on the neighboring volcanoes, both active and dormant.  The local dogs greeted the team with snaggletooth grins during the walk to the hospital.

The pre-op tasks went smoothly, and rounds were a delight with many patients giving a “thumbs up” as they saw their surgeon.  At this point, some of the patients that were operated on Monday had already gone home if they lived fairly close by or have moved to Casa de Fey (the Faith in Practice boarding facility) to continue their recovery before they made their sometimes lengthy journey back home.

A full schedule of two knee operating rooms, one hip room and one foot and ankle room commenced at approximately 8 a.m.   Most of the knee cases were fairly routine primary knee replacements for the surgeons, but will deliver far from routine changes in the lives of the patients who received them.  The hip cases were challenging due to the patients having prior injuries and/or surgeries that have left them unable to walk normally, and in some cases not walk at all.  Major leg length differences were also encountered with major corrections being completed by the hip surgical team.  Two general surgical cases were performed.  One was an umbilical hernia repair and the second was another Laparocopic Cholecystectomy (gallbladder removal).

One critical portion of the process is the post anesthesia care unit (PACU).  This is the area where patients go immediately after surgery, are revived from their anesthesia, and are observed, monitored and cared for until it is established that they are stable enough to move to a hospital bed.  The Team HIM PACU team is so incredibly positive and experienced, and they are experts at delivering the universal language of smiles to greet patients as they regain consciousness to begin the miraculous journey of recovery and motion after their surgery.

One 30 year-old young man, Alejandro from Amatitlan, Guatemala, has an especially intriguing story.  At the age of 11 he had a traumatic injury to the upper portion of his Femur, or thigh bone.  Ten years later at the age of 21, he was surgically treated to repair his hip with a hip bipolar implant, or half of a total hip replacement.  Approximately one year later he was involved in a motorcycle accident that compromised his pelvis causing his leg to shorten and greatly affecting his ability walk.  Over the next eight years his hip continued to deteriorate, and his left leg grew shorter and shorter.  When he came to Obras, his left leg was approximately five inches shorter than his right leg and he was barely able to walk.  Dr. Keith Berend and his team was able to recover most, if not all of his leg length back, giving him a functioning hip joint (his post-op x-ray is shown in the images) which will enable him to return to a normal life of mobility.  The smile on his face from his hospital bed shows his remarkable attitude and gratitude for this gift he has been given as a result of the efforts of Team Hope in Motion.

Stay tuned for an update on the final day of surgery for Team HIM tomorrow!!

To support this team and their commitment to our patients visit: 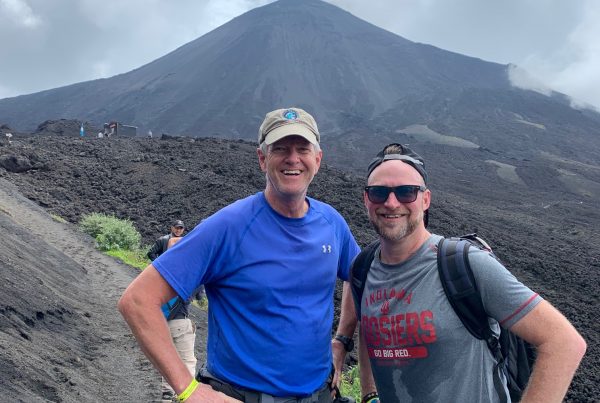 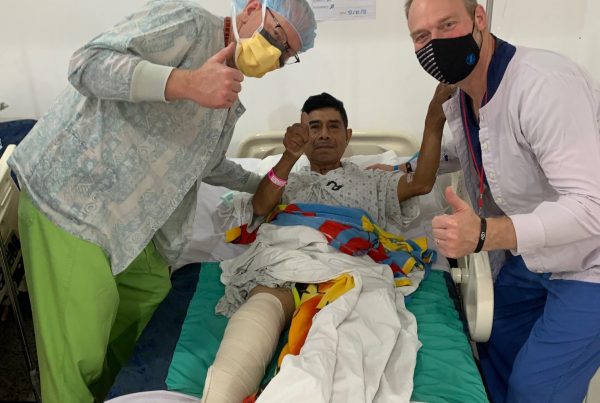 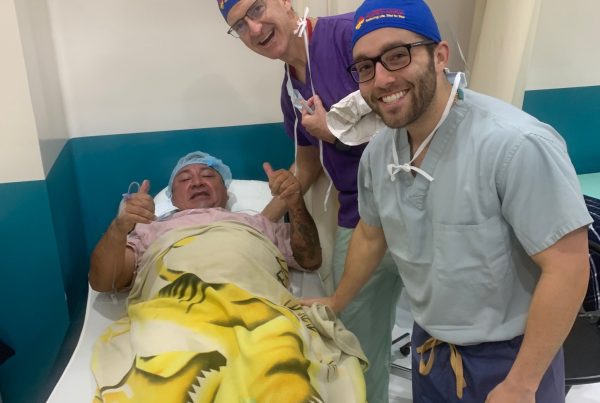